The Environment | Wildlife and their Native Habitats

The City of Weston utilizes many of the practices recommended by the National Wildlife Federation for wildlife habitats, including monitoring and maintaining a natural state of the back berms and littoral shelves of our lakes. Invasive tree species and plants are removed, while native plant species are encouraged to grow in a naturalized state.

Nearly 45 species of mammals frequent the Everglades and over 50 kinds of reptiles, including the alligator, live in the wetlands. As close neighbors to the Everglades, and bordering on thousands of acres of wetland preserves, your backyard has an abundance of wildlife and natural beauty just waiting to be discovered.

Wildlife observation reporting is a part of the monitoring requirements for Weston's wetland preserves. Should you encounter a wild animal in your neighborhood, report injured, orphaned or nuisance wildlife to the Florida Fish and Wildlife Commission. Click here for additional information.

Weston Residents Need to Be Familiar With Necessary Precautions.

It is likely that at one time or another, you may see an alligator in or near the water bodies. Grates are in place on all four of the city's main canals to prevent the movement of large alligators from the main canals to the interior lake system, but this does not eliminate the possibility of movement over land. May and June are their mating season and they tend to become more visible as they traverse between water bodies, seeking a mate. As a result of urbanization around traditional alligator habitats, there has been increased contact between alligators and people. Their ability to adapt has resulted in alligators being found in what would seem to be unlikely places:  underneath cars in driveways, in drainage ditches, swimming pools and on golf courses.

It is advised that you treat any water body as having the possibility of an alligator. Also remember, the lakes and canals are for stormwater maintenance (drainage) purposes and not recreation.

If you see an alligator, stay calm. They generally have no intentions of bothering you. Feeding, harassing, or killing alligators violates State law, so just leave them alone. Only nuisance alligators can be removed and the FWC will make that determination and contact a licensed trapper. The City of Weston is not permitted to handle an alligator for any reason. 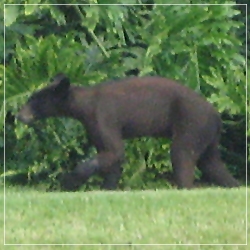 The Florida Black Bear is the largest native land mammal in Florida. It is shy and secretive, hiding in dense vegetation and rarely seen in the wild. A unique subspecies of the American black bear, the Florida black bear once roamed throughout Florida and over the border into southern Georgia and Alabama. Once numbering over 12,000, today an estimated 3,920 black bears remain, purely due to conservation efforts. Florida's black bears are omnivores and eat a wide variety of foods, with eighty percent of their diet made up of plant material. Loss of habitat and being hit by vehicles are its main threats to survival. Conflicts between humans and bears are most often created by people. Intentional and unintentional feeding of bears is the number one source of the problem.

For more information on local wildlife inhabitants of the Everglades, visit:
The National Parks Service and the Florida Fish and Wildlife Conservation Commission. 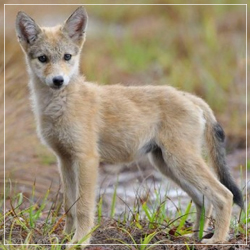 Coyotes are an important part of Florida's natural ecosystem. They live in urban, suburban and rural areas. According to Florida Fish and Wildlife Conservation Commission coyote sightings are very common. Coyotes can be found in every county in Florida, and are probably found within or near every major town or city as well.

Feeding coyotes is illegal. They will lose their fear of humans.

The average Florida coyote weighs about 28 pounds and has a paw track about two inches long.

Be aware of unusual coyote behavior. Unusual behavior could include a coyote that has lost its fear of humans and is approaching people, chasing joggers and bikers, or attacking leashed pets.

An encounter with a coyote in the urban and suburban landscape is a rare event, even where coyotes are found in large numbers.

These animals are generally nocturnal and seldom seen. You may catch a glimpse of a coyote, however, as they move from one part of their territory to another in search of prey (usually small mammals such as mice or voles).

Observing a coyote in this manner (even during the daytime) does not mean that the coyote is sick or aggressive. If the coyote is scared away by your presence, they are exhibiting natural behavior and this should not be cause for concern.

In the FAQs below from Fish and Wildlife Commission you will find a lot of information.  One to note is:

Why won’t FWC just eradicate coyotes?
Research from Florida and other states has shown that removing coyotes is an inefficient and ineffective method to control local coyote populations. This is because coyotes can compensate by increasing litter size and new coyotes can move into habitat others have been removed from. For these reasons, removal efforts have to be continuous or coyote populations can quickly return to their original size.

If You Encounter a Coyote...

Coyote attacks on people are very rare. More people are killed by errant golf balls and flying champagne corks each year than are bitten by coyotes. The following actions can be taken to deter coyotes. A coyote who does not run away when encountering humans has, most likely, become accustomed or habituated to people. This generally occurs when a coyote has been fed (in the form of handouts, pet food left outside, or unsecured garbage).

If you have a close encounter with a coyote, use the following techniques to deter the animal:

If you encounter an aggressive coyote in your neighborhood, report it to the Florida Fish and Wildlife Conservation Commission's South Region Office at 561-625-5122. Do not report sightings.

FWC asks people to report only unusual coyote behavior or any kind of negative encounter, such as a nuisance issue or a loss of a family pet. When people call about coyote problems, they will explain how to deal with the problem and also provide legal options. Their handling of coyote calls is primarily geared towards helping the public minimize or mitigate nuisance wildlife issues. If you want to report coyote sightings, you can download the App iNaturalist or some other citizen science-based program, or you can post it on Neighbors app or Next Door to alert neighbors so that those nearby can secure pets and other attractants such as pet food and garbage.

To learn more about Coyotes in Florida from the FWC, click here.

Interesting Facts and Frequently Asked Questions about Coyotes from the FWC, click here.

To learn more about Wildlife in Weston, click here. 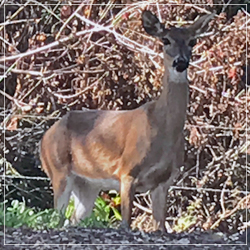 Weston's mitigation area that buffers the City from the Everglades is a popular habitat for deer. Residents and motorists should be aware that deer sightings can be common, particularly in the areas along Manatee Isles Drive, SW 26th Street, Saddle Club and South Post Roads. Vehicle collisions are more frequent during deer migration and mating season in October, November and December. Deer are most visible and active at dusk and dawn. They often travel in groups; so if you see one crossing the road, there are often more deer nearby.

If you see a deer in the roadway, brake but do not swerve. Most fatalities and injuries happen when drivers swerve their vehicle and hit a tree or another vehicle.

The Florida Everglades and surrounding areas are home to many species of Heron. There are 16 species of wading birds remaining in the Everglades and they have similar features. They are all swift, silent hunters living mostly on aquatic prey. The most well known of the heron species is the largest wading bird in the Everglades, the Great Blue Heron, however the most common bird sighted in South Florida is the White Ibis.

This nocturnal animal has adapted extremely well to the suburban environment as South Florida's population increase has squeezed out their habitat. Raccoons often den in backyards, beneath decks, inside accessible structures (such as sheds), or attics. They eat both plants and animals. In addition to feeding on backyard fruits, nuts, and vegetables, they scavenge from garbage cans. Pet food left outside overnight ranks high as a food resource, and should be removed before nightfall. Pick up fallen fruits and nuts frequently. Raccoons also eat small rodents, insects and other small pests.

Raccoons may have that cute, cuddly look, but they are wild animals that bite and scratch.

Rabies concern: The majority of rabies cases in the U.S. are in wildlife, and raccoon cases dominate. Rabies is a serious public health concern to South Florida humans and pets. Cats, dogs and horses are all susceptible to contracting this disease. Broward County requires all domestic animals be vaccinated. In fact, cats have accounted for the greatest proportion of rabies cases reported to the Center for Disease Control since 1988. If you see a raccoon, stay away and keep pets away from the animal as well. 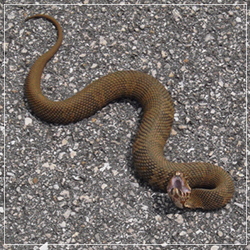 Snakes can be found in every natural habitat in Florida. With 45 species of snakes in Florida, only six are venomous and a danger to humans and pets. The snakes that most frequently turn up in backyard swimming pools are the ringneck snake and crowned snake and they are totally harmless. If one turns up in your pool, they can be removed with a skimmer and released into your garden or shrubs.

Florida snakes are not aggressive unless cornered and most snakes will flee rather than confront a human. You may fear snakes, but snakes fear you as well. If you see one, leave it alone and it will wander away on its own. Sometimes when basking in the sun, it may want to stay there until it gets warm.

When snakes bite: Biting is not a sign the snake is venomous or that it is vicious. It happens to be the only way they have to defend themselves. The only acceptable treatment for a venomous snakebite, involves the use of antivenin. If you or someone else is bitten by a venomous snake, seek immediate medical attention at the nearest hospital or medical facility. Stay calm, remove any rings that could restrict circulation if hands swell, keep the bitten limb below the level of the heart, and call 9-1-1.


Free viewers are required for some of the attached documents.
They can be downloaded by clicking on the icons below.