No need for alarm, but rather a dose of sobering education just in case this type of bacteria should begin to spread to palms within our area in the future. There is no cure once a palm is infected but there is a way to protect healthy trees once a tree nearby has tested positive; but it comes with a cost.  Antibiotic injections will run approximately $110 per healthy tree/per year.

In late 2006, a novel phytoplasma disease was identified in Hillsborough County, Florida, in the Tampa area. The phytoplasma was isolated from edible date palm (Phoenix dactylifera), wild date palm (Phoenix sylvestris), Canary Island date palm (Phoenix canariensis), and Queen palm (Syagrus romanzoffiana). In 2008, the phytoplasma was subsequently isolated from the Cabbage palm (Sabal palmetto). The disease was first called Texas Phoenix Palm Decline (TPPD) because it was found to be the same pathogen isolated from P. canariensis in Texas in the early 2000s. Due to the expansion of the disease into Florida and Louisiana as well as its discovery in Mexico and the fact that it infected palms outside the genus Phoenix, the name was changed to lethal bronzing (LB) disease in order to reflect the symptoms seen in various hosts.

Lethal bronzing disease is caused by a phytoplasma, an unculturable bacterium that has no cell wall. Among phytoplasmas, the LB agent has been classified as a member of 16S rDNA RFLP group 16SrIV, subgroup D (16SrIV-D). The signature DNA sequence obtained from LB phytoplasma in Florida is a perfect match to the signature barcode of the phytoplasma known to cause LB on P. canariensis (Canary Island date palm) in the Corpus Christi area of Texas. Analysis of DNA has determined the LB phytoplasma is related to but genetically distinct from the phytoplasma that causes LY.

Phytoplasmas live in the part of the plant where sap is transported (phloem tissue). Phytoplasmas are transmitted to plants by piercing-sucking insects that feed on the sap. The insects spread the phytoplasma from plant to plant as they visit different hosts during their feeding activities. Phytoplasmas are not known to survive outside their host, whether the host is plant or insect. Planthoppers and leafhoppers are the main groups of insects that transmit phytoplasmas.

The first symptoms of LBD are variable. However, if fruit is present, the first symptom is generally premature fruit drop (Figure 1). If fruit has not set but inflorescences are present, they will become necrotic (Figure 2). Note that if the palm is not old enough to produce fruit, if it is not putting out an inflorescence at the time of infection, or if the inflorescences are trimmed, then these will not be reliable indicators for infection status. Inflorescence necrosis/fruit drop progresses to discoloration of the oldest leaves (closest to the ground) that gradually advances to younger leaves (Figure 3). The final stage of the disease is the collapse of the spear leaf, indicating that the heart or bud of the palm (apical meristem) has died and the palm has completely declined with no chance of saving it. The length of time between infection and symptom development (latent period) appears to be about four to five months. From symptom development to collapse of spear leaf is about two to three months, but this is highly variable. In some cases, no leaf discoloration is observed, but the spear leaf will collapse and the palm will test positive. Symptom progression occurs at different rates in different palm species. 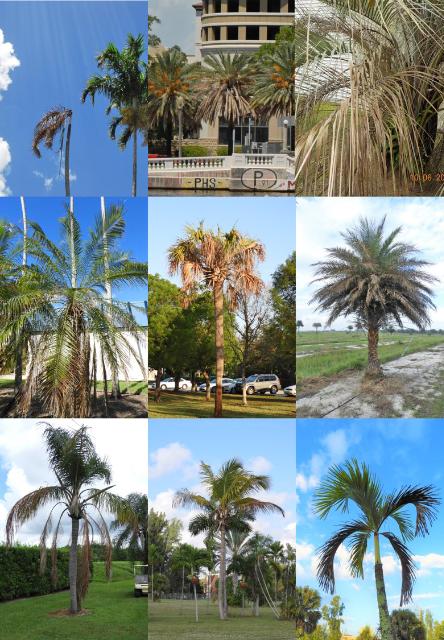 Currently, the 16SrIV-D phytoplasma has been found in 16 different species of palm (Figure 4, Table 1). As the disease becomes more established in Florida and spreads further south into areas with higher palm diversity, the host range could expand. Also, since the introduction of LBD to the state of Florida, the 16SrIV-D has been isolated from palms in 31 different counties (Figure 5, Table 2). To date, the disease is most prevalent in the central part of Florida, but is spreading farther north and south, with Jacksonville being the northernmost limit and the Florida Keys being the southernmost record. The disease has also been reported in Louisiana.

Counties in Florida with confirmed cases of LBD.

Management of LBD involves removal of infected palms and preventative injection of antibiotics. Current data suggests that once palms start showing symptoms, the label rate for the antibiotic oxytetracycline-hydrochloride is not sufficient for symptom reversal. Because of this, upon symptom development and/or a positive test result, a palm is considered lost and should be removed immediately to reduce the amount of time this source of phytoplasma exists in the environment. The longer it is left, the higher probability that further spread will occur. Sampling healthy-looking palms around symptomatic palms can help get ahead of the disease because healthy-looking palms can also test positive. Even though no symptoms are present, those palms still need to be removed because there will not be sufficient time for the antibiotic to take effect before symptoms develop. Also, by testing healthy-looking palms, you can identify which palms are not infected and start preventative injections with the antibiotic.

Link to the UF/IFAS site for further information and photos.

1. This document is PP243, one of a series of the Plant Pathology Department, UF/IFAS Extension. Original publication date November 2007. Revised May 2019. Visit the EDIS website at https://edis.ifas.ufl.edu for the currently supported version of this publication.