The Weston City Commission is comprised of five members:  the Mayor and four Commissioners.  The Mayor and Commissioners are elected at-large by a plurality vote, meaning the candidate with the highest number of votes wins the seat.  Although the Commission seats are separated into districts, all registered voters in Weston can vote for each seat.  There are no run-off elections.

The City of Weston's municipal elections are held on the same dates as the November General Election every even-numbered year. The Commission seats are staggered so that the entire Commission is not up for re-election at once. The City is divided into four areas as delineated on the Commission Residential Seat Areas map and assigned numbered seats:  1, 2, 3, and 4. 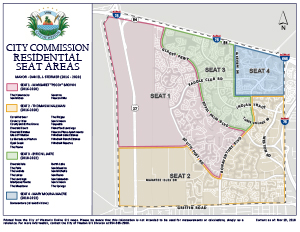 To qualify to run for election for a Commission Seat a person must be a resident of the Residential Area that he/she is running for, and have resided continuously within the Residential Area for which election is being sought for at least one year preceding the date of filing. The Mayor is elected at-large and may reside in any area of the City.

Individuals who are interested in becoming a candidate for the City of Weston may contact the City Clerk for additional information.

The next General Election is scheduled for:
Tuesday, November 3, 2020

The following candidates have qualified for the November 3, 2020 Municipal Election and will be on the Weston ballot.

All qualified electors (registered voters) who reside in  the City of Weston and whose names appear upon the registration books in the Office of the Broward County Supervisor of Elections, will be eligible to vote in said election. These registration books shall close on Monday, October 5, 2020, at 5:00 p.m.

For additional information about elections in the City of Weston, contact:

To verify your voter registration status or to inquire about your polling location, visit
the Broward County Supervisor of Elections website at BrowardSOE.org or call 954-357-7050.